Can You Use Dictation With Movie Magic Screenwriter?

In this article we are going to talk a little bit about dictation with movie Magic screenwriter.

If you take a look at the functionality and the difference between Mac and Windows, you will find that there is a dictation feature on the Mac, but not on the PC.

That is, at least that is my observation, that the Mac version uses the built in dictation feature that comes with the operating system and you can access it via the “edit” menu. 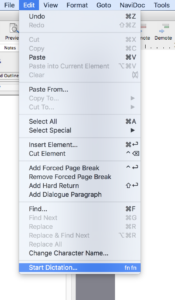 The “Edit” menu on the PC does not have that function.

But, since on the Mac, movie Magic screenwriter uses the built-in dictation feature, it really doesn’t have anything to do with the application itself. It’s just that you can access the Mac OS dictation via the edit menu, that’s all.

Also, I could not find any documentation on how to use the dictation feature in moving medic screenwriter on the Mac, so I’m guessing that they have not customized it, like other screenwriting applications have.

Some applications use the Mac dictation feature, that build on it to enable you for example to say things like,“Interior, Garage, Day” to write an “INT. GARAGE – DAY” scene heading with the correct formatting.

I tried to find out what movie magic screenwriter does if I dictate this (“Interior, Garage, Day”), but in my case the dictation feature didn’t even work at all, for whatever reason. It may just be a bug on my machine.

Anyway, I think the bottom line is that you don’t have really useful dictation that allows “real screenwriting” if you will within movie magic screenwriter.

If you are a Windows 10 user what you can try is to use Cortana and see how that works.

And of course, if you are more serious about dictation or maybe you are forced to use it for whatever reason, then you might consider looking into paid solutions, such as Dragon Dictate, which is a very different beast in terms of what it can do with dictation and definitely beyond the scope of this article.

So, in terms of built-in dictation with Movie Magic Screenwriter, sadly, not much to report there.

How To Export An Animation Dialogue Script With Movie Magic Screenwriteer