(Note: Screenshots are from verison 11, but Reports work the same way in Final Draft 12)

Sometimes you as a writer or maybe the production departments needs an overview of certain script information to plan the shoot. For example, they might need a list of all the locations that are needed in the movie.

For obvious reasons it’s not practical to go through the script and do a manual count.

So, Final Draft gives you a variety of different reports that you can use to get a better overview, or a summary of some sort, of certain script elements.

Let’s have a look at what kinds of reports you can export from Final Draft.

As the name suggest, the scene report gives you a list of all your scenes. You can choose to order them either in:

Choose a font that you want to use for this report. 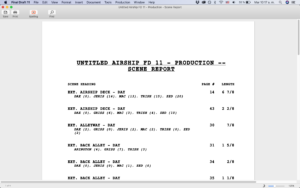 The location report gives you a list with additional information of your locations. You can choose to order after: 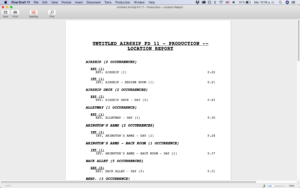 To export a character report for a certain character choose one of the characters first, then select or deselect if you want scene headings, dialogue, and/or arc beats displayed. 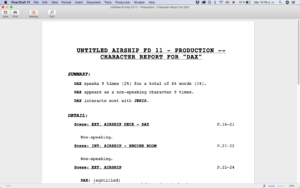 The cast report gives you statistics about each of your characters: 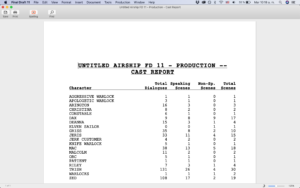 The script report function lets you basically export a script but you can choose which of the elements you want to export.

If you were to export all the script elements here you’d basically get a “normal” script export so to speak, apart from the header and the footer.

You can also choose whether you want to export this as a script document with the usual screenplay formatting, or as a regular text document. If you choose “Text Document”, Final Draft will export all the elements flush left. 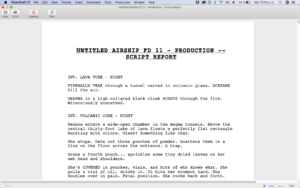 The ScriptNote Report lets you export your Notes, in case you want to have them in a separate document.

Again, you can choose the order in which you want Final Draft to export the Information:

Final Draft then creates an overview of all the notes including all the information you select or deselect above. You can also choose to include certain ScriptNote types while excluding others. 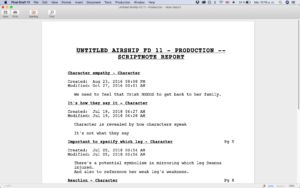 The statistics Report gives you general statistics about your whole script.

You can choose to include or exclude

What you get is a statistical overview, how often you’ve used certain script elements, how many scenes each character has, how often they speak, who they interact with, and so on and so forth.

And, Final Draft will list all the swear words and profanity you use in your script and give you statistics on that too. 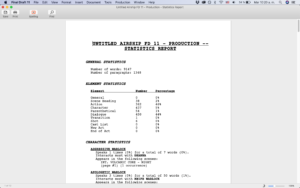