(Note: Screenshots are from version 11 but it works the same way in Final Draft 12.)

In this article we’ll have a look at scene and page numbers. This is a very important part of the pre-production and production phase of your project because after a certain point page and scene numbers cannot change anymore. This is because everyone in the production department and in other departments has to rely on this information. Otherwise it would be impossible to make sure that everyone is literally on the same page when planning and carrying out certain tasks like prepping sets, costumes, visual effects and other stuff.

So, how does this work when changes are made to the script, after scene and page numbers have been locked for production?

Once a script goes into pre-production, the page and scene numbers are locked and are not changed. So, when certain scene are changed afterward the corresponding pages are called “revisions” or “revised pages”.

We’ll have a look at revisions in another lesson, for now you only need to know that this is how they’re called.

If a scene or a page is added, this scene or page gets a number, usually appended or preceded by a letter, because the following page or scene number is already taken.

So, during the pre-production and production process, there will be scenes and pages changes all the time and until production is wrapped up your script will most likely be a collection of pages from different revised versions.

So, let’s see how the numbering of scenes and pages works inside of Final Draft 12.

To assign numbers to your scenes, go to “Production – Scene Numbers”. 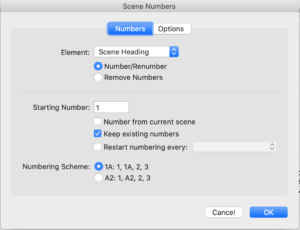 Choose the element you want to add numbering to, in this case that’s “Scenes”.

You have two choices of numbering available here, please check with your production department which of the two they want to use.

Then choose, with which number you want to start, usually this will be “1”.

You can start numbering from the current scene if you want. If this box is not checked, numbering will start at the beginning of your script with your first scene.

If you’ve numbered any scenes before and you want to keep their numbers intact, check this box here, “Keep existing numbers”.

In the options tab you can check or uncheck whether you want the number to appear on the left, the right, or on both sides of the page.

And, in case you want to use a different font you can do so.

So, now we’ve assigned numbers to scenes, next thing we need to do is lock the page count, so the page each scene appears on won’t change if we make changes.

For this, go to “Production – Lock Pages”.

Now, usually you will want to do this because from now on you will be working with those “revised pages” we were talking about earlier.

But we haven’t looked at how revisions work yet. So, follow along with me and we’ll have a look at revisions.