Write Your Screenplay With The Final Draft Mobile App

I honestly thought about not even making a video about this, the writing with the Final Draft Mobile App because it’s so straight forward, but anyway. Maybe you don’t have the app and want to see what it looks like.

So, let’s have a quick look how that’s done.

With your script open in Final Draft Mobile, tap anywhere inside the script and the keyboard slides in from underneath. 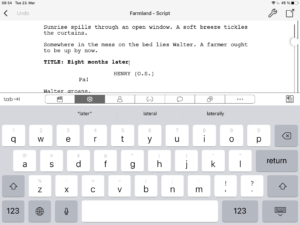 And you can see Final Draft has added a couple of shortcut buttons in order to facilitate your writing experience a bit.

Because the writing is hard enough, right, at least let’s make it as little easier with some buttons.

Anyway, you can see there is a TAB button, so you can jump between the formatting elements with TAB and ENTER, just like you’re used to it from the desktop application. 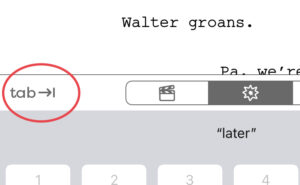 Then, you have shortcut button to access the different formatting elements directly, like scene heading, action, character, ….

You know all that.

And at the right side you have a formatting button for font and paragraph style changes. 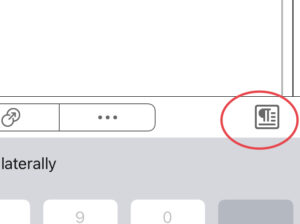 And basically that’s it.

Almost wasn’t even worth a video.

One more thing, if you connect an external keyboard to your iDevice, of course the onscreen keyboard goes away so you see more of the brilliance you’ve just written.

And, the top row with the tab key and the format quick access buttons that stays in place. You probably don’t have those buttons on your keyboard.

Although, now that I think of it, maybe Final Draft should create a special keyboard, you know, with colored buttons, like all the video editors have.

Someone should tell them.