Let’s have a look at cast lists in Final Draft. This is something that is especially interesting to sitcom writers.

Cast lists are lists underneath the scene headings. It is a list of all the characters that will appear in the following scene.

Cast lists are a script element and have to be added manually at the beginning of a scene.

To do that, place the cursor at the beginning of an empty line and hit ENTER. Then choose “Cast List” from the menu that appears. 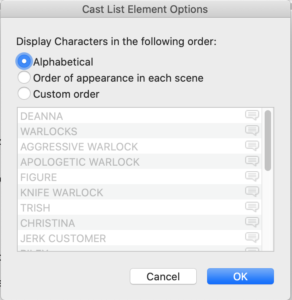 You can choose how your cast lists are displayed. Choose whether you want them to display in alphabetical order, in the order of appearance, or in any custom order you want.

Final Draft automatically adds characters that have lines in that scene. To add a non-speaking character go to “Insert – Add Non-speaking Character”.