How To Format Your Script In Final Draft 12

In this article we’ll look at the different screenplay elements that we’ve already seen before and see how to create them and jump from element to element quickly to keep in the writing flow.

Most screenplay writing programs, and Final Draft is no exception, mainly use two keys to jump between the different script elements while writing.

Let’s see how that works.

We have an empty page here, so the first thing we need to create is a scene heading.

We already saw that a scene heading needs to consist of three elements minimum: EXT. Or INT., the location, and the time of day.

So let’s try that.

Just press the “E” key. Final Draft automatically offers to type “EXT.” Because it knows that at the beginning of a scene heading you most likely will want to write either “EXT.” Or “INT.”. 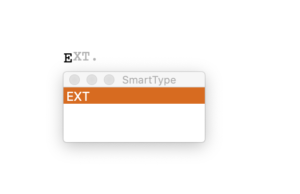 These pre-determined text entries are stores in so-called “Smart Lists” that can also individually be customized. If you want to know more about that check out the video about Smart Type.

Now we can either continue to write “EXT.” Or just press TAB, and Final Draft will complete the suggestion by itself and waits for our next entry, the location.

Let’s type something, for example, “GARAGE”.

TAB again, Final Draft automatically creates the dash that is standard in between the location and time of day and asks us which time of day we want to use. 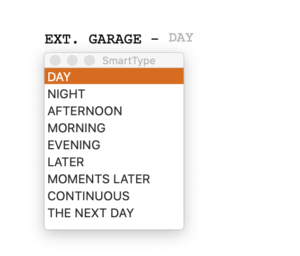 We can either choose or write, but before you do that let’s take a look at the top of the screen. There you see in the Elements menu it says, “Scene Heading”.

Now, if we press ENTER, several things happen at once. Final Draft completes the entry of the scene heading, brings us to the next paragraph, keeping a gap between the scene heading and the next line, and it automatically changes the screenplay element from “Scene Heading” to “Action”. If you up down to the screenplay element menu again, you see it now says, “Action”.

That’s because usually a Scene Heading is followed by an action line so that’s what Final Draft offers you. Now you’re ready to write an action line.

The action line is a description of what’s happening in the scene, so just write whatever you want to happen on screen.

Now, we can either write another action line paragraph by hitting ENTER or TAB, or, we can jump to the Character element by hitting TAB again.

What you see is that Final Draft automatically respects the pre-determined settings for indentation and capitalization of the character name. These settings are stored inside of the template file. We’ll have a look later on how you can adjust them if you need to, but the screenplay template in and of itself adheres to industry standard so you shouldn’t need to worry about that.

After writing the character you have several options. You can either jump to a dialogue line with ENTER, or, if you want to enter parentheticals underneath the character name, also calles “wrylies” sometimes, you can do so by hitting TAB.

Remember that in every script element you have listed at the bottom what kind of action TAB and ENTER will perform. So if you’re unsure, especially in the beginning.

So, now with these two keys, ENTER and TAB you should be able to jump between script elements pretty quickly when writing without having to worry about formatting. That’s all Final Draft’s job.

You’ll get used to when to use which one of the buttons very quickly and after having done it a few times you won’t even think about it anymore. 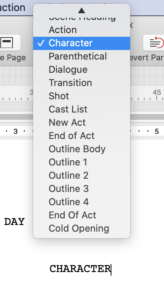 Also, when your cursor is in an empty line, you can just hit ENTER, and Final Draft will give you a menu with script elements to choose from.

So, in this article we learned how to create and use the pre-defined screenplay formatting elements and that using them like this can save you a lot of time when you’re writing. Imagine you’d have to pick each element manually or you’d have to worry every time if the indentations and spaces before and after each element are correct. That would be a lot of work and also be a huge distraction in the writing process.

This automatic element formatting is one of the big differences between a “normal” text editor so to speak and a software with screenwriting capabilities.

Moving Around In Your Script In Final Draft 12

Headers and Footers in Final Draft 12