In this article we will see how Movie Magic’s SmartCheck function can help you avoid formatting errors in your script.

Before you send out your script to a producer or another person in the industry, it’s best to have it proofread by someone else in order to avoid mistakes that make you look bad.

But, apart from that, Movie Magic Screenwriter give you a couple of options to have your script checked for the most basic and probably most common formatting mistakes.

What the program will do is it will go through each script element and check it for common errors. And we’ll go to the settings in a second to see what they are.

Just let’s look at how to use the smartcheck itself first.

If the program discovers a formatting error, it will halt, and will point you to the mistake, telling you what exactly the problem is and it offers you a solution. 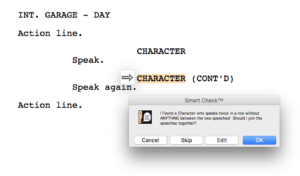 For example, if you have the same character speaking two times in a row without an action line in between, it will, first, let you know that this is the problem, and second, ask you whether or not it should join the speeches together.

And you can then choose between “OK”, which will do what Screenwriter suggests, you can click “Edit” which will stop the smartcheck and give you the possibility to edit the mistake yourself, with “Skip” you can simply ignore the error and continue with the smartcheck, and “Cancel” just cancels the smartcheck without doing anything.

So, knowing how the smartcheck works now, let’s take a look at the preferences so you can set it up exactly the way you want to use it.

Then, in the preferences go to the “Smartcheck” tab. 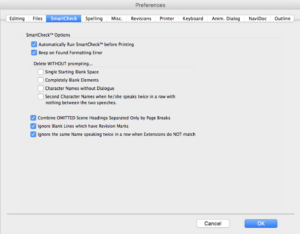 And here we have some options.

First of all, we can check if we want to perform a smartcheck every time before we’re printing automatically.

Also, you can have the program beep on each error that it finds if you like. I’m not a big fan of this, because I’m looking at the screen anyway, so, why would I need a beep, but anyway. If you like that, check it.

Then, below, there are four options that you can check if you want the program to fix these errors automatically during the smartcheck, without stopping and asking you permission.

This last one means that the program will join the two character speeches to together to have one block of dialogue. It’s not going to delete parts of the dialogue.

Then, at the bottom of the preferences you have three more general smartcheck options.

You can combine omitted scene headings if they’re only seperated by a page break, which is something that you only use if you’re in production and dealing with omitted pages.

Also, you can ignore blank lines that have a revision mark. This is also only relevant to you if you’re in production.

And, you can check if you want Movie Magic Screenwriter to ignore the same name twice in a row without an action line in between if the extensions do NOT match.

What that means is, imagine you have a character speaking two times, the first time it just says “character name” and then the dialogue. But the second character name that follows has en extension like “O.S.” For “off screen”. If you check this setting here, Screenwriter will ignore it if the two same character names following each other have different extensions.

So, it will only ask you whether it should resolve the issue if the two same character names following each other have the same extension, or now extension.

Alright, now you know how to do smartchecks with Movie Magic Screenwriter.

Keep in mind though, that this is only a very basic check that helps you to avoid the most common formatting errors. It is not a complete substitute to having your script proofread by another person.