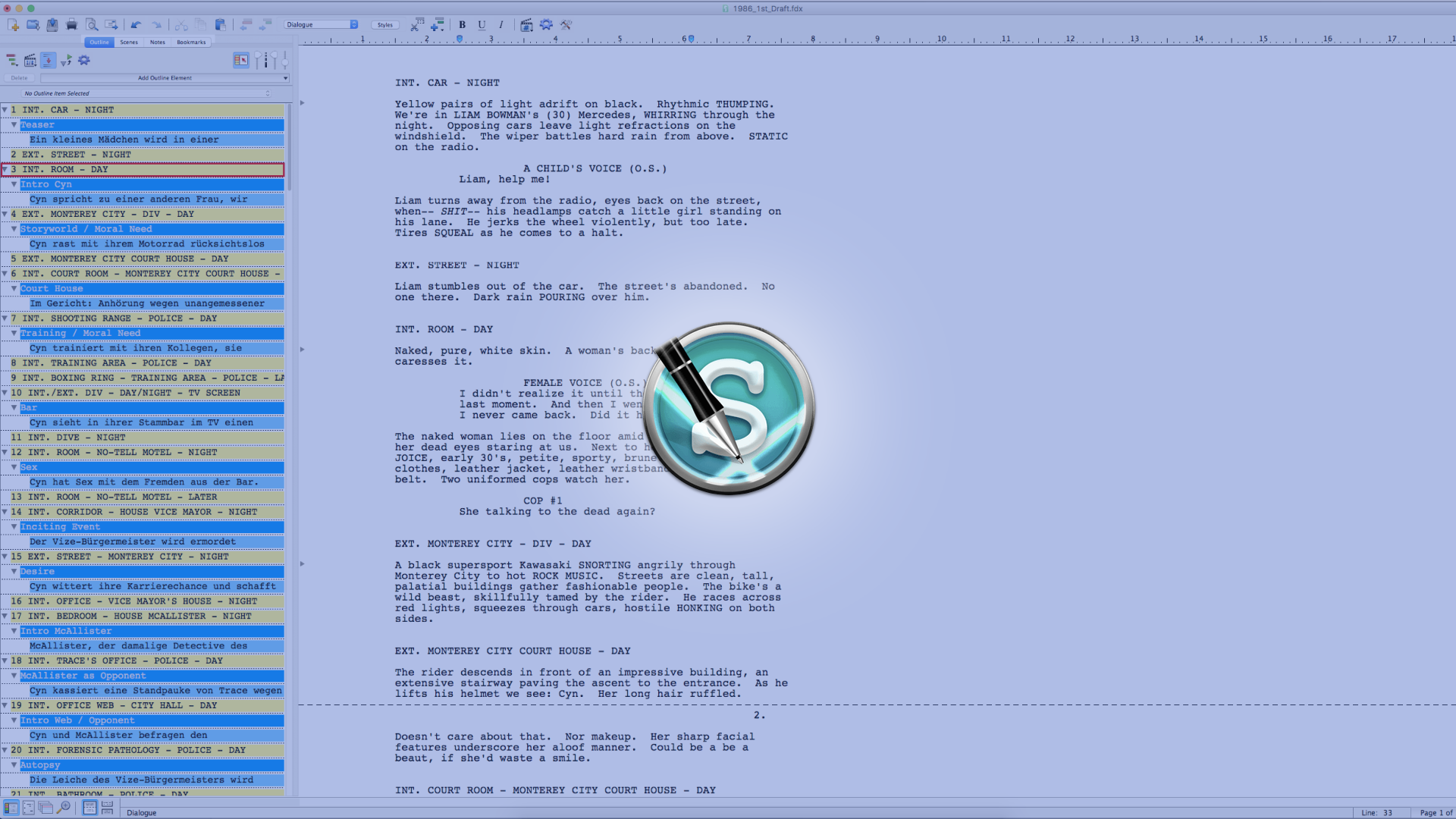 In this article we will go through the basic steps to write your script in Movie Magic Screenwriter. We will talk about what kind of different script formatting elements there are and how to use and edit them.

If you want to follow along with a script of yours that you need to import into Movie Magic Screenwriter first, take a look at that article first.

First of all, let’s talk about the different screenplay elements for a second. If you open up a screenplay page it becomes pretty clear that special formatting rules apply here.

The reason behind that formatting is that one page of a screenplay will be roughly one minute of produced material, although that rule, of course, is not 100% true.

But still, this rule of thumb is used as an estimate over the whole movie or TV show.

Also, it’s really important that screenplays can be read quickly. The reader should get an idea of what’s going on just by glancing over the page quickly. So, pages should have a lot of white space. You don’t want to cram too many big paragraphs in there. Everything should be very light and what is often called “an easy read”.

So, let’s have a look at the different formatting elements on the page. 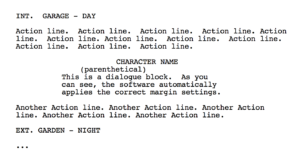 This is what a scene heading looks like most of the time:

It’s written in all caps and it has three elements in it’s most basic form.

The first part “INT.” Stands for “interior” and it indicates if that scene will take place inside or outside, which makes a big difference for planning the shoot. If the scene takes place outside, this will say “EXT.”.

The next part is the location, in this case “Garage”. Whatever location you choose for you scene, that’s where you put it.

Scene Headings are usually (not always) followed by an action line. Action is the part where things that happen are described. What characters do, how they react to each other, how they react to their environment. To a certain degree it can describe how a character feels in order to give the actor some direction as to how to play that part. But remember that a screenplay is a document that describes something visual, so you cannot put things here that we don’t see (as a general rule at least).

Action paragraphs take the whole page from left to right.

The character name element is centered and all caps. It’s the name of that character in the script and it will always be the same (as a general rule). The production department will plan shooting days according to the number of lines each character has (among other things), so one character should have the exact same name throughout the script.

Sometimes, below the character name you have a parenthetical element that includes some direction or commentary that has to do with how the dialogue that will follow should be presented. But in general you should avoid them if you can. Not only should the dialogue speak for itself, you’re also wasting a whole line that you could use elsewhere.

Then, below the character name or the parenthetical element you have the dialogue block. The dialogue element has certain margin settings that make the block kind of narrow and easier to read. This element holds the lines the actor is going to say.

So, the elements that we talked about above are all the basic formatting elements that you need in 99% of the cases. There are other elements but they are used rarely and only under special circumstances.

For example, the “shot” element. There is an element to indicate what camera angle is going to be used shooting the scene. This is usually the job of the director and not of the writer, so for the most part, just forget about indicating shots.

Also, the “transition” element. There is an element that can indicate if you have a special transition between one scene and the next, but many writers have the misconception that you need to indicate that transition between all of the scenes, which is not the case. It’s just a waste of space.

If you don’t put a transition element between scenes, it is assumed that you’re cutting from one scene to the next, and that’s it.

If you really need to indicate that any other transition should be used you can use the transition element to do that, but for the most part I would shy away from that.

One last word about screenplay formatting in general.

Yes, there are quite a few circumstances in which you maybe need to check out how to format something correctly. What I urge you to do in that situation is do research on how this has been done in other scripts.

But, be cautious about people who try to sell you expensive courses on screenplay formatting, telling you that this is what you need in order to be a successful screenwriter.

Yes, you should know the basic rules, but the reason screenplay formatting exists is so that it can be read easily and there are no confusions as to what is happening on the screen and who is saying what. And that’s 99% of it.

If you really want to know more about screenplay formatting I can recommend you a book, it’s called “The Hollywood Standard: The Complete and Authorative Guide to Script Format and Style” by Christopher Riley. It’s just a few bucks and if you’re just starting out you don’t even need that. Just use the main elements that we talked about in this article.

Also, it helps a lot just to download scripts from the internet and read those and see how they did it, although this also comes with a bit of a caution.

Many of those scripts are written by professional screenwriters with a name in the industry, so they might get away with more than a new writer will. So if you see a lot of crazy commenting and formatting – which does happen occasionally – think twice if you really want to do it the same way. Just because someone else got away with it doesn’t mean that you can.

But if you just take a look at a couple of screenplays you will very quickly develop a feel for what makes sense in terms of formatting and what doesn’t.

How To Protect Your Script With Watermarks In Movie Magic Screenwriter

How To Cheat Your Screenplay Page Count With Movie Magic Screenwriter