How To Use Celtx’ Scene Navigator

In this video we will have a look at the scene navigator in celtx.

What happens when you are writing your script is that – of course – it gets longer and longer, and over time it can become quite difficult to find a certain point in the story where you might want to look up something, because it is related to the scene that you’re writing right now, or, you realize you have to change something that you’ve already written.

Whichever reason it might be, you need a possibility to jump to different places in your script quickly.

And that’s what the scene navigator in celtx is for.

If you’re in the celtx script editor, you see this tool box at the right side of the screen, and usually right at the top, you see that it says, “Navigation”.

In case you don’t see that, you can define,which of the tools you want celtx to display here.

If you go to “View – Tools” you can check and uncheck, which of the tools you want displayed. So, just make sure that “Navigation” is checked here. 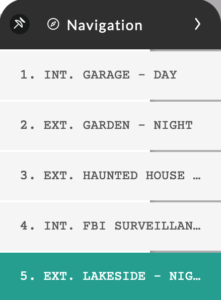 If you click on one of the scene headings, the script editor view will jump to that scene. This makes it very easy for you to get to certain parts of the script directly, without having to go through the whole script in order to find a specific place.

If you don’t need the scene navigator anymore or you just want to hide it for a moment, just click on the “right arrow” in the top area, right next to where it says, “Navigation”, and you will go back to the tool box. 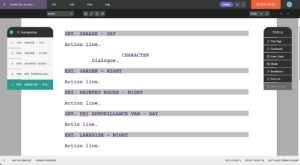 How To Create a Title Page In Celtx