Keeping track of earlier script or book versions can be quite a task as a writer. Not only do you need to decide which versions to keep, you also need to track what the changes are and when you made them.

Luckily script versioning is something that is a lot easier on cloud-based, or browser-based writing applications, and that includes celtx.

Celtx has a very easy to access and easy to use history sytem, that let’s you revert back to earlier versions.

To, that chances of losing that precious scene, or dialogue line, or whatever it might be, are slim to none.

To access the history function in celtx, go to “File – History”. 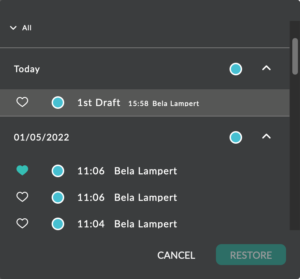 A window opens at the side of the screen that shows you all of the changes you made since you created this project, ordered by date.

If you want to see all the different versions that have been saved on a specific date, just click on the arrow next to that date and it will shows you the save history of that day.

But how do you know which version is which, in a sense that, how would you know what changes you made in each one of those versions?

That’s where favorites and naming come in handy.

With the little heart at the left side of each version, you can define that version as a favorite, and at the top, where it says “All”, you can filter by favorites, so you only see the versions that you marked with a heart.

Also, you can rename versions so they have a useful name. Instead of just having the time of day as a name, you could for example name them, “2nd Rewrite”, “Updated Introduction”, or whatever makes sense in your situation.

To do that just click on the time of day and a field appears where you can input a custom name for that version.

This now makes it a lot easier to distinguish the different drafts that have been saved.

And, you can also filter by renamed versions.

Just like before, where we set the filter to only show us favorites, you can select to only show custom names.

Now, what if you want to go back to an earlier version of your script or book?

If you are a paid celtx user, you can go back to one of the versions that have been automatically stored for you.

If you’re using the free version, you can’t, but there is a work around.

If you want to go back to an old version, just select that version from the save history, then mark all the text in the editor, copy it by pressing Ctrl-C or Cmd-C, then go back to the current version in the history and paste in the text you copied with Ctrl-V or Cmd-V.

Now that new version, where you just pasted in the text from the older one, will be saved as the current version, and you have the same effect as if to reverting back to an older draft.

How To Export Your Script With Celtx

How To Use Celtx’ Spellchecker And Dictionaries