Let’s look at a couple of script settings, mainly MORE’s and CONTINUED’s and how you can set them up in celtx.

But first, let’s have a look at what these are.

And just as a side not, there are different opinions as to to what degree they are necessary. But this article is not meant to debate that, but rather just explain to you what they are and how you can set them up in celtx in case you want to use them, for whatever reason.

So, what are they?

First, we have character MORE’s and CONTINUED’s. What they indicate is that there is either one character speaking two times in a row with no other character dialogue in between, or, that the dialogue of a character runs over a page break.

If you take a look at the script example, you see that when a character is speaking two times in a row without another character in between, it will add a “CONT’D” in parenthesis after the character name of the second dialogue block.

Also, if the dialogue of a character runs across a page break, it will add a “MORE” in parenthesis directly before the page break, and, again, a “CONT’D” after the character name on the next page, where the dialogue is continued. 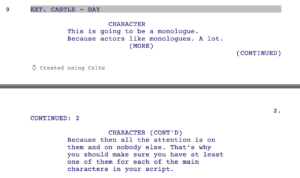 Then, there are scene CONTINUED’s. This means that a scene runs over a page break. And in this case, a “CONTINUED” in parenthesis is put at the end of the old page on the right side of the page, andother “CONTINUED” is put at the top of the following page, optionally with a number that indicates over how many pages this scene runs.

In this case, you see the number “2” at the top of the page, and if the scene would run over more pages, this number would incremend with every page.

Alright, now that we know what these are, let’s see how we can set up these MORE’s and CONTINUED’S.

There, in the lower part of the window you have the settings for character and scene MORE’s and CONTINUED’s.

You can decide if you want Character MORE’s and CONTINUED’s activated across page breaks and/or within a page, and you can also change what they say actually.

If you want them to say anything else than what they do by default – I don’t know why you would want that, but that’s not the point – you could change them. Just click with your mouse inside of the text field and put in whatever you feel like.

The same with scene CONTINUED’s.

And while we’re at it, let’s also take a look at the other settings we have here.

At the bottom right you can set your “orphans and widows” preferences. Orphans and widows are words or end of sentences that run over a page break and are left alone there because it’s the end of a scene.

It’s annoying to read, so you can set how you want to handle these here.

The solution to having orphans and widows is to keep them together with the element that came before, so the last line isn’t left on its own on a new page, or also a scene heading that might stay as the last line on a script page before the page break.

So, by activating these, you can decide, for which elements you want celtx to change the page break just a little bit, in order to avoid these orphans and widows.

Then, above, you have settings for page size, you can choose between the American and the European standard size, and you can change your line spacing.

But be careful with the line spacing because this is what is often referred to as “cheating”.

If you cram more lines on a page than you should, or than what is standard, you will lower your page count, but it will be detected by the reader, so, this might not really help you.

But still, you can do it if you want to.

Then, on the right side you can activate to begin every new act on a new page in case you are writing for television and you want to do have it that way.

Then, way at the top, you can set to have page numbers displayed or hidden, this should be on by default, because, why would you want to hide page numbers.

But you could if you wanted to do so.

How To Display Page and Scene Numbers In Celtx

How To Use Fullscreen Mode, Night Mode, And Custom Colors In Celtx