In this article we’ll have a look at the third tab in the navigator, which is the character navigator. This allows you to keep track of all the major and minor characters in your movie. 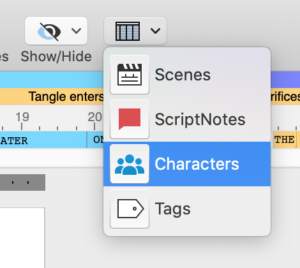 Over the course of writing your script, you will have a bunch of characters to watch. And sometimes if you’re working on the details of a specific character it can be easier to focus just on his or her scenes, his or her arc, or other things.

That’s exactly what the character navigator helps you with. 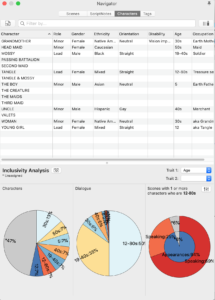 The window has the same look to it as do the Scene Navigator and the ScriptNotes navigator. So, you’ll be familiar with it in no time.

At the top you have a search bar, and at the top right, if you click on that button to show or hide columns, you can choose which traits you would like to have displayed for your characters.

You can also add additional traits. This will add an extra column to the character navigator that you can fill with text.

Also, the same way as in the Scenes and ScriptNotes Navigator you can choose which columns you would like to have displayed from the dropdown menu.

At the bottom you have an area that shows you statistics about your characters. You can choose 2 traits from the dropdown menus on the right side, where it says, “Trait 1” and “Trait 2”, and those traits will be shown in the pie charts on the left and in the middle. 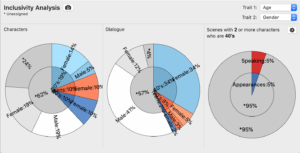 The pie chart on the right shows you a combination of the traits if you want.

You could for example choose to display X scenes that show a certain combination of trait 1 and trait 2. To do that, click on the gear icon just below the trait dropdown menus.