When you’re writing, over time most likely you will have accumulated several versions of your script with different changes or ideas. So, you might run into a situation where you want to compare two scripts to see what the differences are.

Final Draft has an extra tool for that, it’s called ScriptCompare.

Let’s look at how to use it.

First, open one of the two scripts you would like to compare.

Then go to “Tools – ScriptCompare”. 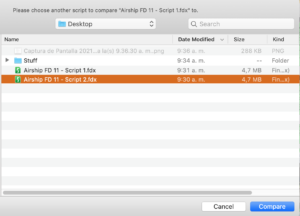 Final Draft will create a new file for you, showing you exactly what the differences between those two scripts are.

The differences will be marked up in blue if they’re additions, or marked up in strikethrough red if they’ve been deleted in the other version.

This gives you a very quick and reliable way to see what exactly you or maybe even someone else changed in between versions.

Theoretically you could also use that tool together with a writing partner and have all the changes marked up after exchanging scripts.

But there are also other possibilities to work together with a writing partner inside of Final Draft.