Fade In vs. Final Draft – Which To Buy?

Write and develop your Script with Final Draft 12.

We go from idea to outline to draft. Click the button below for details and to sign up:

Which One Is Better? Final Draft Or Fade In?

OK, so in this article I want to compare the two quite popular screenwriting applications Final Draft and Fade In and give you my opinions.

But before we dive into the differences, let’s real quick talk about what both of them do well.

They’re both professional screenwriting applications, meaning, they will help you format your script to industry standards, they have production tools and they both have a bunch of other tools that help you with your writing in general, like scene overview, character lists, synopsis, alternative dialogue and what not.

Both are offline screenwriting programs. Meaning, you don’t write in a browser window, but in a “real” application that is installed on your computer.

Also, both have a pay once model. You pay once and you own the copy. You don’t have to pay a subscription fee every month.

Then, both can handle the Final Draft file format. Well, obviously Final Draft can handle that, but also Fade In can import it as well as export it. So there is no problem of intercompatibility between the two. Fade In does have it’s own format, though, but converting that to fdx is no problem.

So, no matter which of them you choose, most probably you won’t really miss anything.

Having said that, let’s look at some differences.

Or, in other words, let’s see if this statement from Fade In is true.

For just a fraction of what it costs to buy a new copy of Final Draft, you’ll get a software package that does everything Final Draft does and more. Not only that, but it’s less than the cost of a single Final Draft update — and updates to Fade In are free. How can it get any better than that?

Let’s see if that is true.

I’m not going to go through all the bells and whistles of both applications, since there is already a ton of content on this on this channel and on other channels as well.

So let’s just focus on the main differences between the two, what I think might be decision makers or brakers in terms of considering them for your screenwriting endeavours.

Alright, what are the differences?

I’ll just point out the differences that I noted, you have to judge for yourself if you think they make a real difference for you. 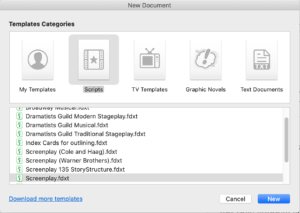 It already has a lot of different templates built in, and if you want, you can download a lot more from their website. What’s nice about the Final Draft templates, they also include story structure examples, so when you use them you already have the beats of that respective story structure on your beat board. 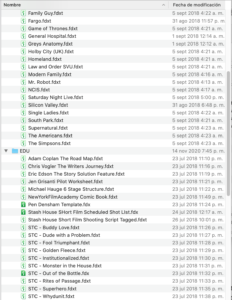 That’s kind of nice, if you want to work with them. Fade In doesn’t have any of those.

Fade in also gives you a bunch of templates and lets you download additional ones from their website. And there is one I want to point out specifically. 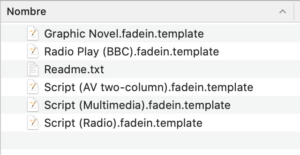 And that is the Fade In AV script template. AV means audiovisual script and this format is used for commercial productions sometimes or for corporate videos and that kind of stuff.

A while back Final Draft supported AV scripts as well, I don’t remember if it was a different application or if it did it inside of the Final Draft application itself. But at some point they stopped supporting that format, so if that’s something you’re going to use, this is a definitive advantage for Fade In.

So, as fas as templates go, Final Draft has more and also has story structure templates, but Fade In has the AV template.

When it comes to working with scenes I personally prefer the way the Fade In Scene Navigator is implemented. The problem in Final Draft is that the Scene Navigator somehow is always a little bit in the way and covering parts of the script.

In Fade In it has its own integrated window on the side and doesn’t distract at all. 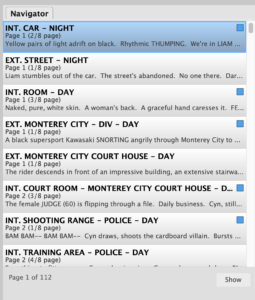 That said, I have to admit that the Final Draft Scene Navigator has a lot more functionality. You get this table view of scenes, you can also make expand the window to full size, and you can even export your script’s scene information as a CSV, which is awesome. 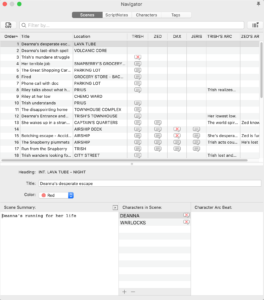 So, it’s a matter of design versus function if you will. Fade In is easier to use, Final Draft has more functionality here.

Fade In imports more file formats than Final Draft, for example pdf, fountain, and highland. You can even import Scrivener files.

So, the import file type point definitely goes to Fade In.

Also, it has more export possibilities, like for example, Scrivener again, fountain again, and also epub for eBooks or open screenplay format. 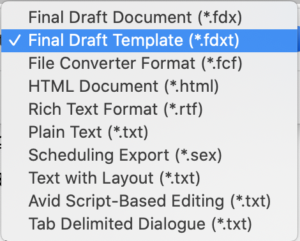 Final Draft doesn’t export to any of those.

Although I should mention here that if you know what you’re doing you can export a Final Draft file for Scrivener or even fountain, it’s just not officially supported and therefore you have to jump through some hoops to get it done.

Final Draft gives you a 60-day trial period in which you can test everything.

Fade In gives you an indefinite free trial, but you can’t use online realtime collaboration and you have a watermark in your pdf export. And every now and then a dialog box pops up and asks you to purchase.

That’s very generous, if you ask me. At least a lot more generous than most software vendors out there. Because if you don’t care about collaboration because you’re writing alone and you don’t care about the watermark, you’re good. You got a free screenwriting software.

Although, theoretically, if you think a little bit out of the box, I’m sure you’ll find a possibility to forego the watermarking, but then… I think Fade In is so generous on their free version policy, they give you so much for free that if you decide to use the software on an ongoing basis, you really should buy it to support further development.

Both have index cards.

But only Final Draft has the beat board. That is something they added in version 10. I’m not sure if you even need that, but anyway. If you like that, then that’s an advantage Final Draft has over Fade In. 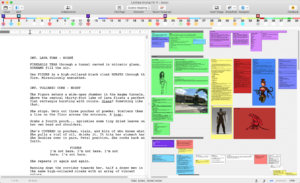 The problem with the beat board is that you can only export it as one big pdf, so in my opinion its usability is a bit constrained, but then again, as a notepad it’s great because it is saved together with your script document, it’s one file. And Fade In doesn’t have anything similar.

Okay, this is personal preference of course.

But I think that Final Draft just looks better. I wouldn’t say the Fade In design puts me off, that’s too much to say, but if I compare the two I think Final Draft looks cleaner and more modern. 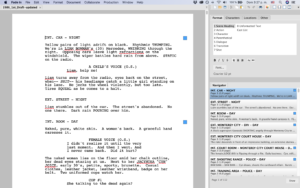 It’s a bit like with computers. Apple computers can’t do more than PC’s in general. Sometimes they’re even more expensive and have reduced functionality. But they’re pleasing to look at.

Now, how important that is, is up to you. On the one hand you can say, well, it’s more about what the software can do, right? It will produce a wonderfully formatted script. So, who cares.

Then, on the other hand, if you spend hours and hours looking at it… You have to decide that for yourself.

Which brings me to the …

All in all, I would say, Fade In has the overall advantage. It just has more functionality. And there are also a bunch of little functions that I didn’t mention here that I like a lot in Fade In that Final Draft doesn’t have. So, I would say, Fade In is the overall winner. Above all if you consider that a full Fade In version doesn’t even cost as much as a Final Draft Update.

But, again, it totally depends on what you want and need. There are some areas where Final Draft has a slight advantage, for example the beat board and the design.

How important those things are to you, that’s your choice to make.

Alright, I hope I could help you a little with your decision, if there’s somethign I missed or if you disagree, let me know in the comments or if you’re using one of the two, let me know how it’s working for you.

How To Reformat Your Script Quickly In Final Draft 12