Write and develop your Script with Final Draft 12.

We go from idea to outline to draft. Click the button below for details and to sign up:

How To Use “Find And Replace” In Final Draft 12

Apart from the “Search Tool”, which is discussed in another article, Final Draft has another tool for when you just want to search for a certain word and character name.

And this tool is the “Find and Replace”. If you’ve used a find and replace tool in another text editor, you’ll quickly become familiar with this one. It works pretty much the same way, except that it adds the possibility to include certain screenplay related elements.

Let’s see what it does. 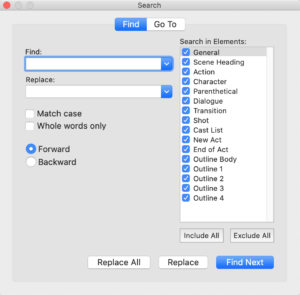 To search for a word just enter it and hit “Find Next”. Final Draft 12 will jump to the word if it finds it.

You can choose to only search for full words, exclude or include capitalization, and search forward or backwards, depending on where you think you’re going to find the search term more quickly.

So far this is pretty much standard for text editor search and replace tools. What Final Draft 12 adds for screenwriters is that it lets you choose which screenplay elements you want to include in or exclude from the search.

That way, if somewhere in your action lines the word “Garage” appears, it will continue to be “Garage” and it won’t be changed to “John’s Garage”.

If you want to change the name of a character you would have to select all the elements where a character name appears. So, to make it easier, Final Draft 10 has an extra tools for that. 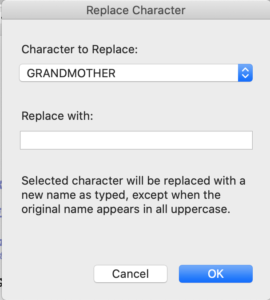 Choose the character you want to replace and enter the new name.

But, be careful, this tool will replace the character name everywhere: action lines, parenthetical, in every dialogue line, and also in the background in Smart lists, that we haven’t yet had the chance to look at.

Also, this action cannot be undone, so be sure you really want to do it and double check if the new character name is written correctly.

Final Draft 12 Review – Should I Upgrade?