MOREs and CONTINUEDs in Final Draft 12

Final Draft gives you the possibility to show additional information in the header or the footer of a page, among others, MORE’s and CONTINUED’s.

There are different opinions out there whether you should use this function or not.

What it can do is it give you the possibility to see that dialogue elements or scenes are interrupted by a page break.

So, the preceding page at the bottom will say, “MORE” to show you that there is more to come on the next page, and the following page will say, “CONTINUED” at the top to tell you that the scene already started on the page before.

If you want to use this, go to “Document – MOREs and CONTINUEDs”. 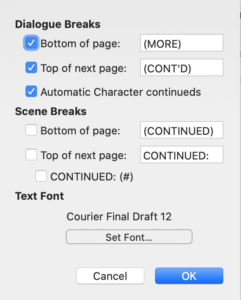 I personally would advise against it because Final Draft cannot know if a character really speaks continually or is interrupted by an action that he or she performs. Only you as a writer can know that.

But of course you have to decide that for yourself if you want to use that function or not.

You can also define the font here that you want to use for your scene breaks.