How To Use Fountain Syntax In Highland 2

Let’s look at bit more closely at the fountain syntax for screenwriting now.

As we said, fountain is just basic text, it’s not a proprietary format. Theoretically use it in any simple text editor.

If that text editor does not know how to interpret the fountain syntax, no problem, you will still have a screenplay that is very easily readabl, it’s just that some elements will have a different or no indentation, and you won’t see the formatting like bold and italics and such.

But still, you can read it, and the format itself is platform and software-independent.

But when you do have a software that can interpret the fountain syntax, then you have a beautifully formatted screenplay with all the elements in the right place.

So, let’s look at what this fountain syntax is and how it works.

Fountain has some elements that work without needing extra syntax, and that is because the way they are normally used in a screenplay makes them easy to recognize anyway.

But don’t worry, we will go through the most common ones in this video.

If you write your screenplay like this in Highland 2… 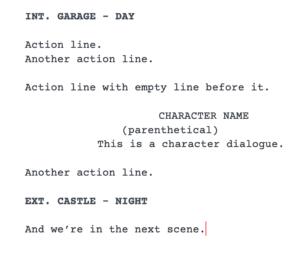 … it will look like this when it’s interpreted as fountain.

For scene headings, just type “INT.” Or “EXT.”, And whatever fountain interpreter, or program, you use, it will recognize this as a scene heading. Theoretically it is sufficient to type this in lower case, it doesn’t necessarily have to be in upper case, but it is recommendable to use upper case anyway for scene headings, not only because it’s industry standard and expected, but also because they’re easier to find this way when you’re glancing over the page.

Other begginnings of scene headings that will be recognized as such if they are followed by a dot:

Basically, every element that is not considered anything else, is considered an action element. Fountain will respects the number of linebreaks you choose to make, whether you use single line returns or double spacing to separate two paragraphs of action.

Every line that is written in all uppercase and that has an empty line before it and no empty line after it, is considered a character element.

Although you can theoretically indent character elements with tabs or spaces, it is not necessary for fountain to interpret it correctly.

Be aware that character names must include at least one alphabetical letter. That means, a character name cannot consist of only numbers.

If you need to force character name recognition, for example if your character name must include lowercase letters, you can put the “@”-sign at the beginning of the line.

Every element that follows a character element or parenthetical elements is automatically considered a dialogue element.

Parentheticals needs to be wrapped in parentheses, which is not very surprising, and they also must follow a character elements. But this follows the standard screenwriting formatting principles anyway, so you don’t really have the care about that.

If you really need to use transitions, what I would urge you to do as little as possible, you just need to make sure that your transitions and in “TO:”. This way fountain knows that this element should be a transition. Also, transitions need an empty line before and after the element and need to be in all caps.

Now, this is not a complete list of the fountain syntax you can use, but it should be more than enough to get you started. 99% of the time you will be using the standard formatting input elements anyway, and for the rest of the syntax I recommend you check out the links that I provided earlier.

This way, you will get used two using the fountain syntax in a very short amount of time and you will appreciate its simplicity and platform independence.

How To Convert Highland Files To Fountain And Vice Versa