In this article we will have a look at the Highland Bin.

If you happen to be a video editor also, or if you’ve worked with some kind of video editing software before, the name “Bin” and this concept will be very familiar to you.

A bin is essentially a container that can hold a certain type of media, or different kinds of media.

When you’re editing a video, you might have several source videos that you need a part from, but you also might have sounds, images, graphics, and so on and so forth. And different bins help you order all these source materials.

You can think of it kind of like a folder that you have on your computer.

But bins in video editing can also hold parts of materials, so for example, it could hold just part of a video, or a sound, or a changed version of a picture.

And that’s exactly what the bin in Highland does.

The bin is like a container where you can store parts of your text. This could be just a word, a line, or even several paragraphs.

The text you store in the bin is not a file. The bin is just a place where you can put parts of test that you might need again later, but at this point you don’t necessarily want to have them in the document itself.

So, let’s see how you do that.

And it’s in fact super easy.

Moving/copying Text to the Bin

You just select some text in the editor, and then you click-drag that selected text to the bin with your mouse.

Make sure that before you drag, you hold your clicking position just for a second or so, and then you drag it over. If you drag too quickly, the program thinks you want to select another part of the text, and you will lose your selection.

Alternatively, you also can use the “Cut to Bin” and “Copy to Bin” functions in the “Edit” menu.

If you cut to bin, the text will be removed from the editor and saved in the bin.

If you copy to bin, the text will be stored in the bin, but remains in your document also.

If you want to copy the text with your mouse, you can hold the “ALT”-key while you drag the text over, and when you do that you see a little “plus”-sign appear right next to the mouse pointer to indicate that you are copying the text, and not just moving it.

Now, if you want to put text back from the bin into the document, the procedure is the same.

You grab one of the text blocks that you stored in the bin, and you drag it into the document.

Same rules apply here. If you drag it while holding down the “ALT” key, the text is copied, instead of cut.

Editing Text in the Bin

Now, let’s say, you want to save some text in the bin, but you don’t want it to be exactly the way it is, you want to change something.

If you double-click on a text block that you already have in your bin, a little editor window opens and you can change the text right there. 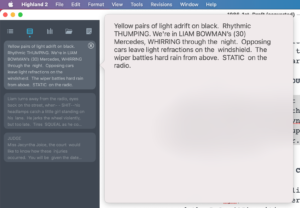 When you’re done with the changes, just click outside of this pop-up editor window and the change are saved automatically.

Depending on how long the text is that you have in the bin, you might not see the whole block but just the first few lines. Highland still saves the whole block, so if you don’t see your changes beause they might be further down and that part is now shown in the bin, don’t worry, when you double click on the text block again you’ll see that all the changes are there.

One more thing, let’s say you want to save the text that you have in your bin in an extra document.

Maybe you collected some great ideas here, but you’re done with the main document and before you archive it you just want to save all the ideas that you had, and that you might want to make good use of in another project, to an extra file so you can use them at a later time or in another application.

To do that, just click on the export button at the bottom of the bin sidebar, and Highland will create a new document for you that holds all the text that you placed in the bin.

You can now save these as an extra document.

How To Use Highland 2’s Navigator

How To Include Picture And Text Assets In Highland Files